It turned out to be an introspective day with bad weather. I have been meaning to write this for months because I’m encountering more and more of such women. The term ‘hostage husband’ is generic and it is ‘hostage partner.”

There is fake news, but another annoying factor of life is the fake feminist. I seem to be encountering more and more of this variety. Throughout my life I search for something real and the truth. This search can be a very disappointing quest. And most recently this ‘fake feminism’ has been really bothering me. So, why does this fake feminism bother me so much compared to all the other fakery I encounter? Because such women claim to be so high and mighty and some of them have actually impacted my existence in a negative way. None of my friends or colleagues belong in this category, but through other avenues I have unfortunately been seeing more and more. 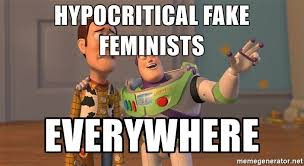 My most recent encounter with one is what prompted this blog. Yes, I fired her (too long of a story), and losses are minimized. But such fake feminists should be banned from practicing any profession where they impact anything. They should just update their fake LinkedIn profiles and stay home or go on vacation. They should not be allowed to squander away people’s hard earned money.

I really don’t care what people do behind closed doors. If the most incompetent woman wants to claim she’s the feminist of the decade because she didn’t change her name and doesn’t let the husband boss her around – I don’t care. Feel sorry for the husband, but then again, like John Milton said in Devil’s Advocate “Free will, it’s a bitch.” And for the fake feminists, John Milton again, “Vanity, definitely my favorite sin.” These women like to live in the delusional state that they are accomplished and contribute to society and did it all on their own as a modern feminist woman. If you call marrying the ‘right guy’ (meaning $$$) an accomplishment, fine, but that doesn’t make them an independent feminist.

Here are warning signs that you have encountered a fake feminists. Do not hire such people for anything-it will be the worst mistake of your life. They are incapable of producing anything; instead, they will diminish or destroy any assets they get their hands on. Yes, I am speaking from experience. I was recently dealt one of these people, later found out she claims to be a feminist and then the utter incompetence was revealed.

They tout and brag about their fake feminism. Here are the some examples (if I included straight social media quotes, or photos, I would be violating privacy laws):

“I never changed my name, I don’t need a man’s name” – changing or not changing your name doesn’t make you anything. The dollars that you collect from your hostage husband are equally green regardless of your name. Instead, look at your accomplishments in any aspect of your life. For these women = none.

“I don’t need to spend all my free time with my husband (or boyfriend).” Really? Good, but you seem to spend his income on all your free time because your achievements didn’t even earn you a minimum wage.

Social media photos of them always having fun without spouses, yet their profile photo may include the spouse because after all….this existence is brought to you by hostage spouse.

Sure there are women who married successful men. But many don’t brag about their delusional feminist status. They may be great mothers, wives and nurturers who chose not to follow a profession. Marrying a successful man doesn’t make one a fake feminist. It’s all the fake jibber jabber that does.

These fake feminists typically never achieved anything on their own. If they were single, they could barely afford a $700 / month apartment and couldn’t keep a minimum wage job. Yet they often have multiple houses but at least one nice home. They are very good at spending their husband’s income not necessarily efficiently, but who cares when you aren’t spending your own hard earned money.

They are typically lousy mothers and wives as well. Since their only claim to fame is being a feminist, being a nurturing mother (or nurturing anything) is just something they would not be proud of. I feel sorry for their pets as well.

They brag about their skills (whatever supposed profession they are in). This doesn’t need explanation. Did Einstein brag about being a genius? People who are accomplished don’t brag about their greatness; they let the results speak for themselves.

They have very strong opinions and it’s impossible to even debate them on any issues. They tune you out because their views have nothing to do with reality. Since they lack basic intelligence, you cannot argue specific points. Debating and thinking is not part of their repertoire. The brag about how witty and ‘sassy’ they are and “Don’t’ mess with me.” They have such ‘strong opinions’ about everything. But, they can’t even spell properly and don’t even have a command of their own native English language. Like Boris said in Golden Eye, “Mush for brains.” Who really would brag about being so strong and tough? More hypocrisy.

They act like they are really accomplished when in fact they have not done one thing right in their entire life…ok, maybe one thing…. they married a hostage who will fuel the fakery. Not all are necessarily married to a high-income hostage. It could be an average guy. What makes them fake feminist is that they exploit these guys and act like there is some sort of contribution they have made on the planet to continue to exploit the guy .

Now I do know some very accomplished women, nurturing mothers and wives, some single mothers at all income and education levels. They are not fake feminists. Instead they are busy building their lives and loved ones lives and do not care about fake labels. They are real.

You may wonder why the hostage men stay? No it’s not anything you may suspect (again, no achievements in ANY aspect of life). These guys are too busy supporting these women to do anything. Unless the fake feminist leaves them…they stay, because divorcing such beings is not easy because the fake feminist has no other opportunities in life other than that hostage guy.

Again, if you suspect you are dealing with such a fake feminist in business or ‘friendship’. RUN or FLY

Chocolate and Cartier
#time #rachmaninoff #grandseiko
#nationwearredday #americanheartmonth #americanheartassociation
An evening
Still Monday ❄️🌸
Is it Friday yet? No, #thorisday
🌸❄️ #grandseikowednesday
A sign…when the sun peaks out on a dreary day right after sitting to play
Monday mornings are difficult
Friday 🌸❄️
Warming up
#seikosunday #grandseiko 🌸❄️
A grand week